On June 15, 2021, a food startup named Rise Brewing filed suit against PepsiCo in the U.S. District Court for the Northern District of Illinois. The startup has begun to make a name for itself by selling canned cold-brew coffee. Rise Brewing has alleged that the well-known company PepsiCo has infringed on their trademark with their recent launch of a Mountain Dew-branded energy drink called Rise.1

According to Forbes, the notorious food, snack, and soda company, PepsiCo, is valued at an astounding $18.2 billion.2 PepsiCo has had its fair share of trademark infringement cases in the past, where they have been sued by brands such as VitaminWater, Polar seltzer, and Simply Orange Juice.

A more recent lawsuit was filed in the United States District Court for the Southern District of Texas, where a temporary nationwide restraining order had halted PepsiCo’s release of a Gatorade product called Gatorlyte. The order had been issued due to a sports beverage named Electrolit made by a Mexican company.

According to Laboratorios Pisa S.A. de C.V. v. PepsiCo, Inc., PepsiCo allegedly copied the Mexican companies’ product packaging. Before the issuance of the restraining order, PepsiCo shipped roughly $1.7 million worth of Gatorlyte after spending $1.3 million on media and $18 million of product development. 3 The Court considered three facts in determining whether recall of the product, which was already rolled out nationwide, was justified. These three factors were “(1) the willful or intentional infringement by the defendant; (2) whether the risk of confusion to the public and injury to the trademark owner is greater than the burden of the recall to the defendant; and (3) substantial risk of danger to the public due to the defendant’s infringing activity.”4

The Court reasoned that “recall is an extreme remedy” and “therefore they did not find sufficient indicia of willful infringement, confusion to the public that outweighs the onerousness of a recall, or a sufficient risk of danger to the public to justify a full recall of GATORLYTE” at the time of the case.5

The Court then turned to the balancing of the parties’ hardships. The Court stated that although PepsiCo’s investments were significant, the Court did not find that a temporary restraining order would affect the investments to such a degree that would be problematic. Additionally, PepsiCo decided to release their product line despite the initial issuance of a Temporary Restraining Order and the then-pending hearing on another Temporary Restraining Order. The Court turned to the Mexican companies’ argument that PepsiCo was aware of the rights in the Electrolit trade dress, so PepsiCo, therefore, accepted all risks of infringement. Trade dress is the look or feel of the product, in this case, Electrolit’s trade dress was their companies protected product packaging.

U.S. District Court for the Northern District of Illinois

On June 15, 2021, Rise Brewing Company (hereinafter “Rise Brewing”) filed a trademark infringement lawsuit against PepsiCo, alleging that PepsiCo has infringed on their trademark with their recent launch of a Mountain Dew-branded energy drink called Rise.6 The issue in the complaint arose out of the energy drinks use of the word “Rise,” written horizontally across the top of the can, in a fashion almost identical to Rise Brewing.

Rise Brewing created a canned caffeine drink that lacks the chemicals, dairy, fat, and sugar commonly associated with traditional energy and coffee drinks. The brand features the words RISE horizontally across the can, with Brewing Co. located just underneath. Shortly before the complaint was filed, PepsiCo released its own RISE-branded caffeine drink. Rise Brewing alleged the PepsiCo brand marketed itself as a morning caffeinated beverage to replace ready-to-drink coffee drinks such as RISE.

Rise Brewing alleges that PepsiCo’s actions are causing “reverse confusion” in violation of the Lanham Act. Traditionally, in a trademark infringement case, the defendant is the “junior user” of the mark, and the plaintiff is the “senior user.” This type of trademark infringement causes consumers to believe the defendant or its products are associated with the plaintiff or its products. Here, Rise Brewing alleges that it is the opposite. In a reverse confusion case, the consumer confusion for association goes the other way. Meaning, due to PepsiCo’s size, reputation, and power, consumers are confused into thinking that Rise Brewing’s RISE drinks are associated with PepsiCo.

The concept of reverse confusion was established in Big O Tire Dealers, Inc. v. Goodyear Tire & Rubber Co.7 In that case, the Court stated that it was essential to recognize something other than traditional confusion to prevent “anyone with adequate size and resources [from] adopt[ing] any trademark and develop[ing] a new meaning for that trademark as identification of the second user’s products.”8 Rise Brewing alleges this case is a classic case of reverse confusion, demonstrating what the Big O court was trying to prevent. 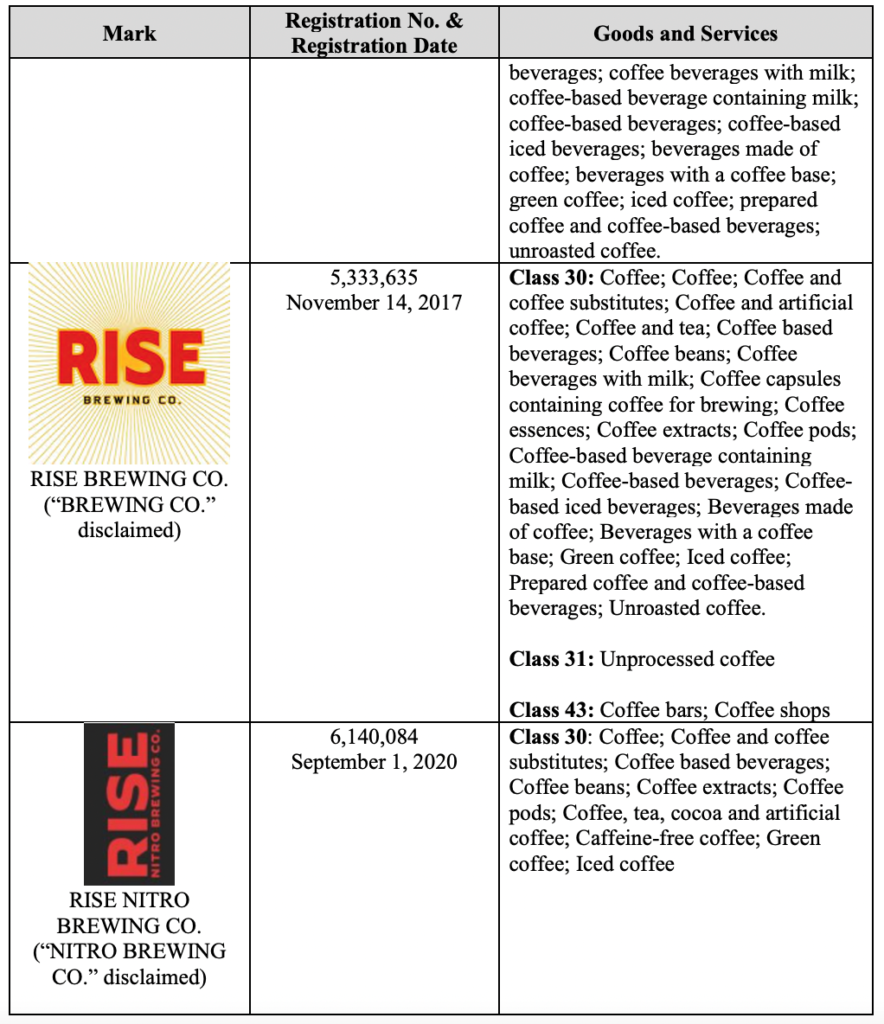 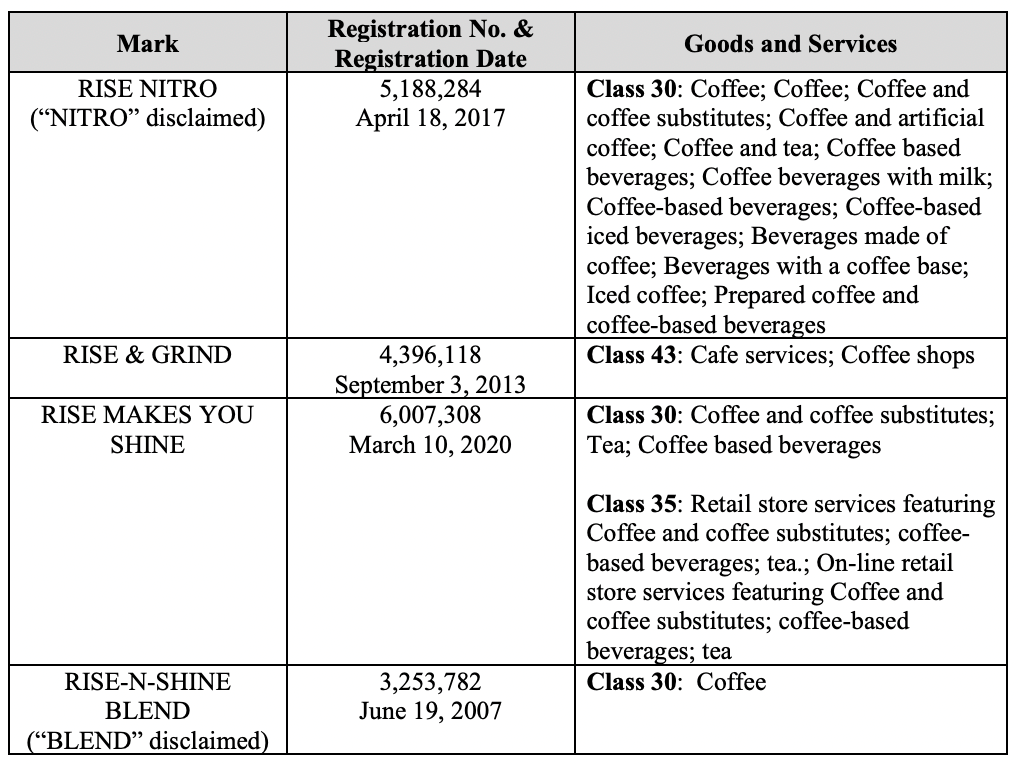 Rise Brewing’s trademark registrations are valid and in full force and effect. It claims to use its RISE Marks through extensive advertising, marketing, and sale of goods bearing the marks. Because of this, Rise Brewing claims that the RISE Marks have become invaluable assets of the Rise Brewing Company, serving as a symbol of their high-quality product.

Rise Brewing would like the court to enter preliminary and permanent injunctions restraining PepsiCo and all of its affiliates from the continued use of its trademark, to recover its costs and reasonable attorneys’ fees, in an amount to be determined, and various amounts of awards for damages and profits.

Following the guidance of previous cases involving PepsiCo’s trademark infringement, Rise Brewing will likely be granted a preliminary injunction and/or grant damages sought. Rise Brewing has built its company from the ground up, creating and protecting their ideas through the use of registered trademarks. PepsiCo’s power in the market is far greater than Rise Brewing’s. The ability for large companies to prey on the hard work of smaller companies should be carefully monitored and regulated by the courts. This fact pattern is remarkably similar to previous cases filed by smaller companies, like Gatorlyte, against PepsiCo, where the smaller company has almost regularly been granted an injunction. The timing of this case makes it quite difficult for Rise Brewing because of the sheer amount of money that was put into the launch by PepsiCo. Because of this, it is more likely that the court will grant damages from this case, or in the chance PepsiCo would like to settle, Rise Brewing could possibility recover at least a small portion of the money PepsiCo will have made from their product launch. In the event of a settlement, like previous cases, the terms will likely remain confidential. If PepsiCo would like to continue to use the word Rise, Rise Brewing could also offer license to PepsiCo. This case is another example that reverse confusion is still present, despite the Big O court’s precedent.

As the case continues, it is essential to remember how valuable intellectual property (patents, trademarks, copyrights, trade secrets) is. Intellectual property, and its protections, foster growth and discovery, allowing for expanding new technology and resources worldwide.