The reworked “fair use” defense has provoked debate because it provides excessively broad immunity to certain types of parodies and other expressive uses of trademarks.1 This Article will explore whether the Trademark Dilution Revision Act (TDRA) promotes a flawed treatment of parodies with regard to sub-clauses that provide selective shelter, and exonerating some parodies from liability while impugning others.2 The principal flaw that is discussed in this Article relates to the parody provision and its application of the trademark use test for determining whether a parody is fair. The provision is pliable in that it can be both lenient and strict on parodies.

The language of the TDRA appears to implicitly divide parodies into two distinct groups: source denoting parodies and non-source denoting parodies. Non-source denoting parodies are artistic parodies- that are not used as trademarks and are treated with leniency, whereas source-identifying parodies generally receive strict treatment3. A plain reading of the provision appears to confer blanket immunity to all parodies as long as they are not being utilized as indicators of source(s) for goods or services4. On the other hand, it imposes liability on parodies that function as trademarks without suitable inquiry into the nature or impact of the parody in question.5,6 This parody approach fails to adequately assess forms of harm since it focuses exclusively on the classification of the parody’s status, rather than the effect.

The focus of inquiry should be on the effect of the parody in relation to the original trademark’s distinctive quality or reputation, with consideration regarding the investment to establish such distinctiveness, and not just on the status and presence of commercial or trademark use.  However, this is not the case because the TDRA’s fair use provision fails to appropriately distinguish parodies that convey an artistic or social message from those that tarnish a senior mark.7  The broad language of the exception allows tarnishing use to be exempt from liability so long as the parody in question is not utilized as a source indicator.8 The “fair use” provision appears to provide automatic immunity to non-source denoting parodies, as it stipulates that only these types of parodies that do not function as designators of source, are eligible for exemption under the provision.9 The exemption is justified by the First Amendment.

Parodies are expressive by nature.10 For this reason, some parodist choose to present their parodies as “works of art” to the public; such representations can be made without any connection to goods or services, and occasionally, without the expectation of commercial gains.11

Still, these parodies can be harmful to the original trademark owner when free-riding occurs, or some harm to the goodwill of the mark because of confusion or false misrepresentation. Free-riding occurs when the parodist receives a benefit from the association between their mark and the well-known mark12. Although some have argued these actions are permissible because they align with the First Amendment justification, and ensure that the original owner shall not be able to monopolize the famous creation, this view fails to consider the investment the original owner sacrificed to establish the identity of being “well-known” or “famous.” As a result, parodists can reap where they have not sown.

Courts have confirmed that the TDRA applies different treatments to parodies based on their categorial status. The TDRA enactment amended the fair use defense by adding an expressed defense for noncommercial use; this plain language of the provision explicitly excluded source denoting parodies. Therefore, courts relied on the main dilution factors provided by the Act, instead of the fair use exception, to immunize source denoting parodies from liability. 13

In Louis Vuitton Malletier S.A. v. Haute Diggity Dog, LLC, the court confirmed that the parody clause in the fair use provision is not exhaustive in its coverage of non-dilutive parodies.14 This case set a precedent which allows parodies that are being used as a trademark to sell goods in commerce to be exempted from liability for dilution, in certain circumstances.15 The court’s analysis indicates that a parody does not necessarily need to satisfy the fair use provision in order to be exonerated from liability.16

The courts affirmations justify the concerns with the TDRA’s fair use parody clause, as it demonstrates that the provision is both too broad in some respects, but also too narrow in others.17 The provision is broad as it largely immunizes all non-source denoting parodies from liability without assessing the message communicated by the parody and its effect on the reputation of the mark. If the message promotes a negative impact on the goodwill of the original trademark owner or free-riding occurs, the original owner will have no claim against the parodist, and the First Amendment justification trumps the original owner’s interest or disfavored effects. On the other hand, the provision is too narrow because it excludes certain source-denoting parodies that may not be deserving of protections because of the extraordinary investments original owners take to establish a specialized distinction for the mark.

Allowing protection under these circumstances, permits the parodist to take advantage of trademark owners marketing investments and efforts they may have taken years to establish. Further, the treatment permits free riding. Consequently, the approach to the treatment of parodies effectively ‘dilutes’ trademark owners of the right to obtain an appropriate remedy against parodist who have tarnished their marks by engaging in an unfair or offensive comparison, and parodist who has benefited from the original owner’s investments.

An example of these effects is demonstrated in Mattel, Inc. v. Walking Mountain Productions. In this case, the parodist is an artist who posed nude Barbie dolls in photographs that displayed Barbie getting attacked by vintage household appliances.18 Although the artist failed to use the term “Barbie,” the art itself irrefutably involved the trademarked doll and the titles reflected that fact.19 The message of the parody meant to diminish the Barbie persona that was established by Mattel through successful marketing.20 Mattel had purportedly established Barbie as “the ideal American woman” and a symbol of “American girlhood.”21 Is it unfair for a parodist to attempt to destroy the goodwill or reputation of the mark? The law certainly does not think so because such actions are viewed as an exercise of the First Amendment right.

But what if the only reason the parodist receives an audience or attention is because of “Barbie.” Is the original owner now entitled to a claim? Had it not been for the original owner, the parody would likely have never been created, nor would the parody have received the level of attention attained. But for the original owner’s investments toward establishing the mark’s goodwill, it is likely the parody would be non-existent, or at the very least would not have obtained the level of attention it received. If these photos only receive attention because of “Barbie,” does that mean the parodist is permitted to free-ride off of the famous mark owner’s marketing efforts and investments that may have taken the owner years to establish? Trademark law is permitting parodist to reap what the original owners have taken years to sow! It could take a trademark-owner years to establish a distinct attractiveness in the marketplace. However, a parodist need only use the famous mark under the guise of a parody and receive the same benefits of attractiveness through association, at a fraction of the time and monetary investment that was devoted by the original owner.

Under these protections lays the question of fairness, which arises when there is harm from the parodist belittling the reputation of the mark that is being ridiculed.22 Still, the current parody provision does not possess sufficient nuance to assess the type or extent of damage inflicted on the senior mark, caused by the tarnishing effects of the parody.23 Particularly, it fails to provide guidance on the level and quality of ridicule that is considered “acceptable” for a parody.24 This raises some concerns; virtually many cases of non-trademark expressive use would receive protection under the Act. The TDRA arguably tilts the balance too far in favor of non-trademark use parodies.

6 It’s the courts duty to inquire about the nature or impact of the parody which is determined through the infringement factors discussed in the following section.

20 Successful marketing requires a huge investment of time, money, and consistency over a period of time.

The LAW FIRM OF DAYREL SEWELL, PLLC is pleased to announce that Messrs. Sewell’s and Fine’s recent, featured publication, “The “Redskins” Trademark: Turn-over on Downs”, appears in this month’s IPFrontline newsletter (Trademark Turn-over on Downs).

You are encouraged to comment and receive free updates by subscribing to the firm’s Blog and Press Release sections. 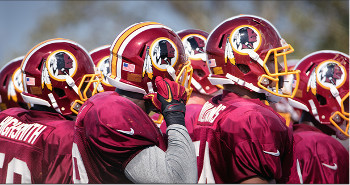